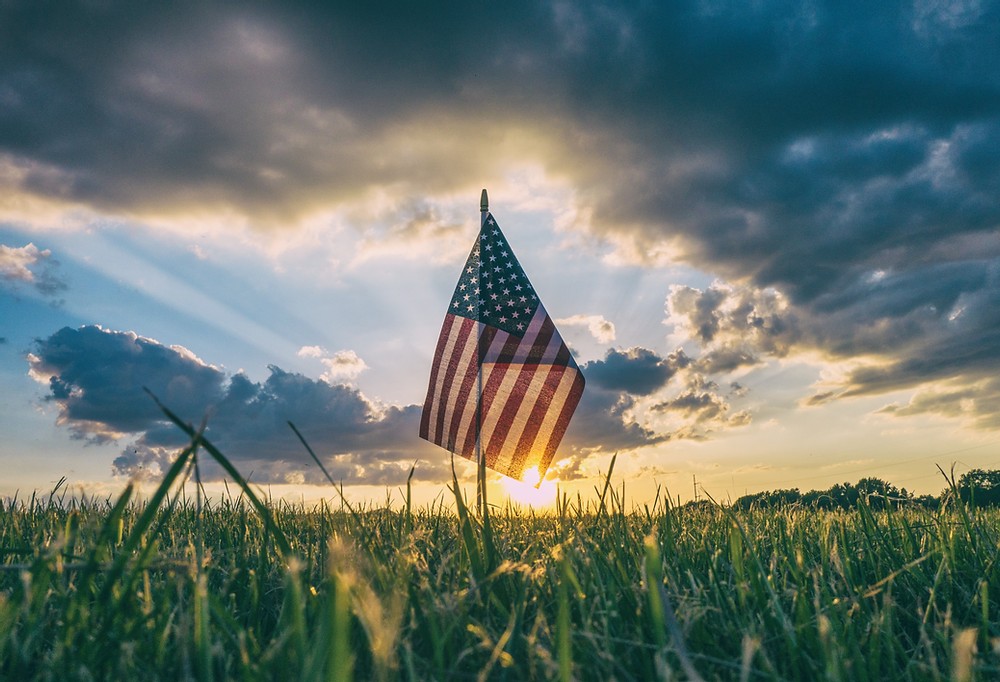 I like to believe I’m a free-spirit in some ways, but when it comes to certain things, I’m a purist, plain and simple: not wearing white after Labor Day or before Easter, waiting to decorate for Christmas until after Thanksgiving, and voting for the president on Election Day.

I always vote on Election Day (and I capitalize it because it’s a big deal). For me, it’s a red-letter, circled-on-the-calendar-date. A day I look forward to and embrace. Voting is a ritual, a tradition, a momentous event.

Every four years when I go to the polls to vote for our leader, I wear red, white, and blue, and sometimes I don a patriotic broach my mother gave me after the 9-11 attacks.  I take my time, savoring the opportunity, and I don’t choose the easy option of voting for a straight party ticket. I look at each race, and make my selection.

When I complete the voting process, no matter what I’m wearing, or how I’m feeling, or if it’s a rainy day, or if the sky is blue, I always cry.  Some might think this is over-the-top, ridiculous, or even a bit crazy, but I never feel more pride in my country, or more like a patriot than I do when I exercise my right to vote—one of the most precious rights granted to me as an American citizen.

Voting for our president is such a privilege and honor. It’s sacred. It’s the day out of all the other days every four years when my voice is heard and counted. Voting is my duty, and I will never take it lightly.

My day doesn’t end there. On election night, as I watch the commentary and returns coming in, I’m armed with a blank copy of the electoral map, and my two crayons, red and blue, and I color in the states and tally up the numbers. Some years, I’ve been able to go to bed early. Others, I’ve stayed up all night. And then there was that time in 2000 when my map wasn’t completely filled-in until December.

As a history teacher, on election day, I would give each student a blank map they could fill in for extra credit. It could even be completed in class as we discussed the outcome. I felt it was so important for the students to be able to analyze the map, and make inferences about the results. I also believed that students should have a complete understanding of the Electoral College system.

There’s a recent movement to do away with the Electoral College and let the outcome of the presidential election be decided by the popular vote. I understand this sentiment if you’re voting for Homecoming Queen, but with the election of the president, the popular vote does not represent all the people. Thankfully, our forefathers understood that the Electoral College protected the smaller, less populated states. If not for this system, the states with the greatest populations would always determine the outcome of elections.

Some years, coloring the map has been a happy experience, while other nights, I’ve wadded up the map and thrown it in the trash. No matter the outcome, though, I have ALWAYS shown respect for the office of the Presidency, and the person in that position. I might not agree with that person’s political platform, views, and decisions, but I would never publicly slam the President with personal attacks and vitriol.

I come from a family of democrats and republicans, teachers and preachers, soldiers and civilians, farmers and businessmen. No matter their vocation, their economic status, their political views, they were all proud Americans.

My ancestors came to America in the 1600s. They fought in the American Revolution, in the war between the states, and also defended Texas at the Alamo. They blazed trails before me that have made my journey easier, but have also made the level of expectations greater.

My parents were conservative democrats for most of my growing-up years. My mom was an elector representing the great state of Texas, casting her official vote for Jimmy Carter in 1976, and I was president of the Young Democrats my senior year in high school. This was in 1980, and I was 17 and not yet able to vote.

After the election, someone placed a Reagan/Bush bumper sticker on the back of my Gremlin (yes, that’s what I drove), and also stuck a banana in my exhaust pipe (if you’ve ever watched “Beverly Hills Cop,” you’ll find that extra funny, and this happened before that movie even came out!) These antics were all done in jest, and were a part of the competitive, spirited, and respectful rivalry between the Young Democrats and Young Republicans. It was a kinder, gentler time.

Since 2016, I’ve watched our nation become completely polarized. The disrespect displayed toward elected officials, as well as others with opposing views, is embarrassing. You might disagree with them, but why be so hateful, cutting, and degrading? (And yes, many elected officials are disrespectful to each other).

In January of 2017, there was a Women’s March on Washington. I wrote a post on Facebook expressing the reasons why I didn’t march (other than the fact I wasn’t in D.C.). I was simply expressing my views, just as others had…BUT my views weren’t the same as several of the readers.

I was quickly taken to the woodshed (but on a public forum) by a former high school classmate (a male, at that) who questioned me about my stance. The most obvious reason he had for attacking me was my conservative viewpoint. Because I’m not one to “air dirty laundry” on Facebook, I sent him a private message. In this message, I defended my views (which I shouldn’t have to do) and then explained that these views are based on my life experiences.

Throughout my lifetime, I’ve heard cries from women about “empowerment.” This includes the action of raising the status of women through education, raising awareness on social issues, literacy, and other training programs. Women’s empowerment is all about equipping and allowing women to make life-determining decisions when dealing with the problems and issues of our society.

Sadly, I have discovered the hard way, that the invitation to this club seems to only apply to women who share the same political beliefs. “I Am Woman Hear Me Roar,” is a sentiment that isn’t always inclusive if your “dogma rings loudly within you,” or if you support the current President.

This viewpoint is a narrative that is also pushed by the mainstream media, whose coverage and treatment of the latest Supreme Court nominee was anything but positive, and in my opinion, appalling. A woman with a stellar resume, and obvious intelligence, was slammed for her religious beliefs and for the adoption of two children from Haiti, and this was all based on her conservative philosophy.

For many women, the confirmation of Justice Amy Coney Barrett has given us a voice—-the Christian, working moms, who believe in the right to life. We now have a place at the table.

For the life of me, I will never understand why we can’t simply “cheer” for each other. I didn’t agree with Justice Ginsburg in most ways, but I admired her for her accomplishments as well as her role in paving the way for other women, regardless of their politics. She also embraced friendships with those from the other side, an example more of us should strive to follow.

Over the years my political views have changed. I have voted for democrats and republicans alike. The first time I voted in a presidential election (Ronald Reagan, 1984), I voted a straight Republican ticket, and as a result, a group of men, referred to as the Texas six-pack, went to Congress. Some were successful, others, not so much. This experience taught me to look at each individual candidate, do some research, and vote intelligently based on who I feel will best represent my district at the state and national levels. I base my vote on platform and patriotism, not personality.

I love my country, and the Constitution of the United States. That’s the bottom line. Our country isn’t perfect, but every single day I wake up proud to be an American. I believe in our freedoms. I pray for our future, and hope that our country can survive this era of division.

The following excerpt is taken from an article in The Atlantic by Adam J. White. In part of this piece, White references the book A Republic If We Can Keep It, a collection of thoughts and essays written by Justice Neil Gorsuch.

“For Gorsuch, civic virtue requires civility. His book highlights the example of his own court. The justices are able to argue and disagree so vigorously in their judicial opinions only because they work so hard to foster a spirit of community with one another: ‘We eat lunch together regularly and share experiences and laughs along the way,’ he wrote, ‘and whenever we gather for work, no matter how stressful the moment, every justice shakes the hand of every other justice.’

The spirit of community among nine justices is not so easy for the country as a whole to replicate. ‘My worry,’ Gorsuch warned, ‘is that in our country today we sometimes overlook the importance of these kinds of bonds and traditions, and of the appreciation for civility and civics they instill.’ In a time when many ‘people are actually calling for an end to civility,’ when people believe that ‘more anger is needed [because] the stakes are too high and the ends justify the means,’ Gorsuch urged that for ‘a government of and by the people’ to work, the people themselves need ‘to talk to one another respectfully; debate and compromise; and strive to live together tolerantly.’ While the ‘essential goodness of the American people is a profound reservoir of strength,’ it ‘cannot be taken for granted’; it ‘need[s] constant tending.’ In an era of fractured politics, the blessings of freedom come ‘with the duty of having to listen to and tolerate other points of view,’ because ‘democracy depends on our willingness, each one of us, to hear and respect even those with whom we disagree.’”

When I was a senior in high school, I was nominated by a teacher to represent my school in the DAR essay contest. I was given two hours to write an essay of a certain length, on a given topic, without any notes. I won at the district level and then my essay traveled to the state level, and that was the end of its journey.

For the life of me, I can’t remember the essay topic. I’ve searched for the paper, and have concluded it ended up in the same place as my Donny Osmond albums, and the slew of photos I collected from various celebrity fan clubs.

Although the paper itself is a distant memory, I do remember it’s conclusion, an anecdote about one of our founders, Ben Franklin.

At the close of the Constitutional Convention of 1787,  Benjamin Franklin was queried as he left Independence Hall on the final day of deliberation. In the notes of Dr. James McHenry, one of Maryland’s delegates to the Convention,  a lady asked Dr. Franklin:

“Well Doctor what have we got, a republic or a monarchy.”

“I’m proud to be an American
Where at least I know I’m free
And I won’t forget the men who died
Who gave that right to me
And I’d gladly stand up next to you
And defend Her still today
‘Cause there ain’t no doubt
I love this land
God Bless the U.S.A.”

(and to quote my hometown paper, “Vote as you please, but please vote.)