Because you always need a little folding money… 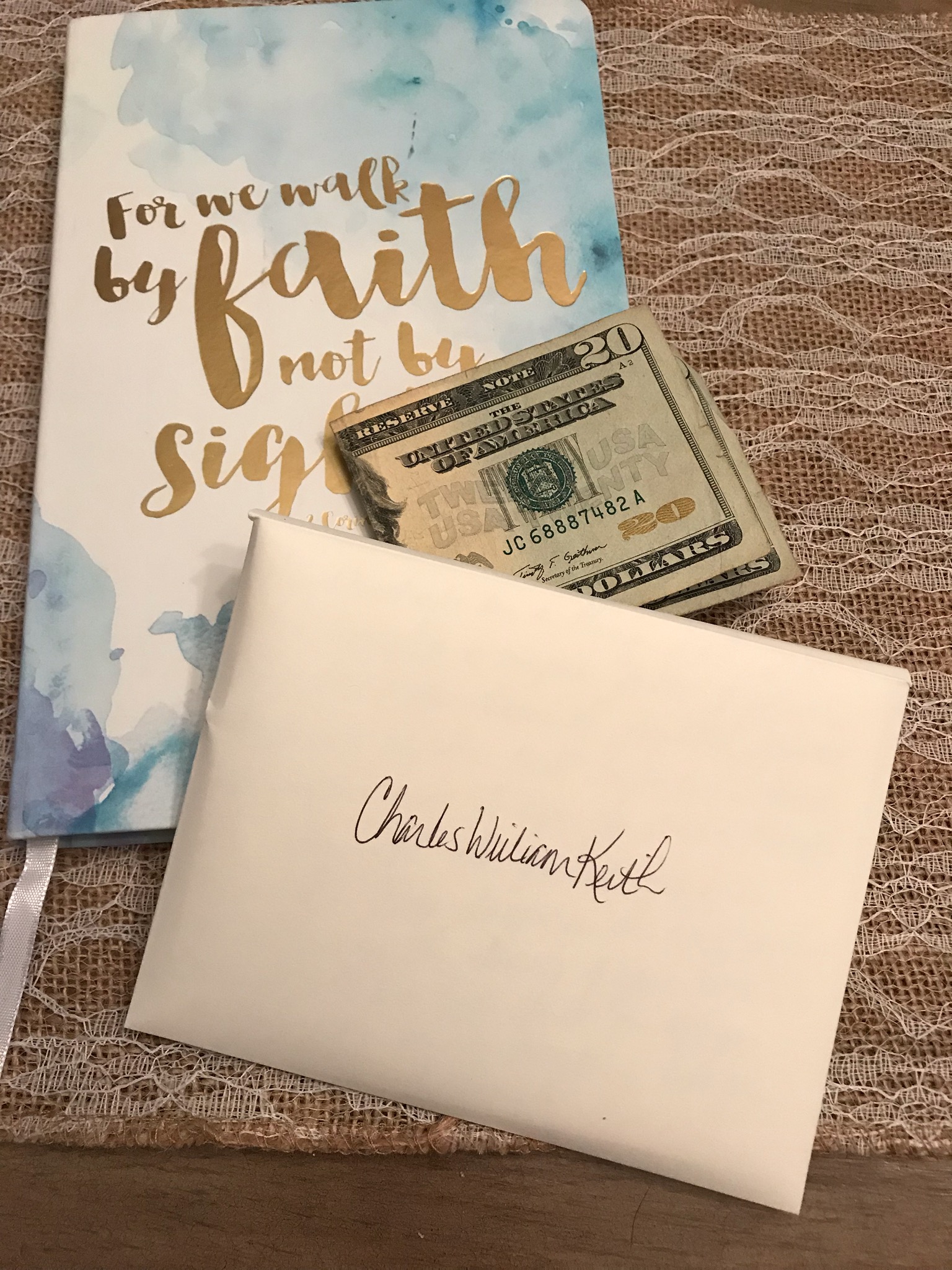 My dad has been on my mind a great deal lately. In this “circle of life” time of my son’s wedding, it seems that in almost everything I do, memories of Dad come flooding in. Last week, I was constantly on the move, and one afternoon, I realized I hadn’t eaten. I grabbed a handful of trail mix to tide me over until I could find something more substantial. I love trail mix, but I’m not a huge fan of raisins. In fact, they make me gag. It’s a texture thing. But as a mature adult, I made a decision, and in the last five years or so I’ve actually decided to stop wasting time picking them out of trail mix. I figure I could use the minutes spent on that task in a more meaningful way. But on that day last week, as I looked at the raisins mixed in with peanuts, sunflower seeds and M&Ms, I fell back into that old habit of ridding then from my life. And I remembered why. During my elementary years, many mornings I ate cereal for breakfast. It was fast and easy for me to fix. It made me feel responsible, and fulfilled the requirement of eating a meal before school. My dad always joined me at the table, and in a well choreographed manner, this is the way it would go. I would pour my Raisin Bran into the bowl, and then begin separating the raisins from the bran. As my dad sat next to me and read the paper, I carefully culled the outcast raisins, and added them to his bowl. We never talked about it. It was just a routine. He liked the raisins and I liked the bran. So four days before my youngest son’s wedding, (the son who never met his grandfather), I stood at my kitchen counter and cried. It wasn’t just the raisin memory, it was the fact that the boy who was named after the greatest man I’ve ever known, was getting married and it was another thing my dad would miss–and I missed him more than I had in a very long time. And in that moment, I knew what I had to do…

I called my mom later in the week and asked if she would bring me one of my dad’s old handkerchiefs. I waited until Saturday morning, and I took out the iron and ironing board, and pressed the handkerchief in the proper fashion. I took out my finest monogrammed stationery, and I composed a note to my son. I slid the soft cotton handkerchief into the envelope and sealed it, placing it on top of the journal that was filled with some thoughts, advice, and recipes that I had prepared to give Charles on his wedding day. As a visual person, the two items just seemed a little lost, and I knew something needed to be added. Folding money. A phrase I hadn’t heard or even thought of in a very long time. Whenever I was in college and came home to visit, the last thing Dad would do before I drove back to A&M was hand me what he referred to as “folding money.” Generally, he would give me between 10-20 dollars, and it was always folded. I think the term means “cash” rather than coins–money that could be folded. He always gave me that, just in case I might need it. It was never enough that I might waste it on something extravagant, but always enough to top the tank off with gas, or buy a drink and a snack along the way. So folding money it was. I looked in my purse and found $40. Not enough for extravagance, and just enough to top off the tank, and get a snack along the way.

Charles came in and saw the items on the table, opened the envelope and read the note. He set them down along with his keys and billfold, but said nothing. I noticed after he left, the three things were gone. But still, nothing had been said. I wasn’t going to brood over it, and I sort of understood the emotional wall that seemed to be present more than ever on that day, understanding he was trying to be strong as long as he could, that once the dam was broken, the tears would flow without ceasing.

I finished getting ready, and we left for the venue. During family photos before the wedding, I tried to see if I could spy the handkerchief anywhere. Since he had a white pocket square in his tux, I figured it had to be in a pocket, out of sight. Or he didn’t have it at all. Again, it wasn’t something that I was obsessing over, I was just curious.

At 6:00, the ceremony began. We were all lined up waiting for our cue. I had reminded everyone to watch their step because there was a small area of concrete with a slight drop-off right outside the barn, and this could be problematic if one wasn’t paying attention. As the last grandparent was seated, it was time for Brian and I to take our seats. With my arm in his, we began our walk to remember, and I was beaming. I had a huge smile across my face as I soaked in the beauty of the day, and the wonder of it all. And then, in true Sharon fashion, I forgot about the slight drop-off from the concrete, and tripped a little. Or maybe a lot. I’m not sure. My heel actually drilled itself into the very soft soil, and that was it. But I did a little dip and I think I said, “woops!” I’m sure some people pitied me, and felt sorry for me for ruining that moment, but honestly, to me, it didn’t matter. It wasn’t about me, it was about Charles and Kaitlyn. I certainly hoped people wouldn’t think I was roaring drunk, staggering down the aisle, but as most things are, it was something I couldn’t control, so why worry about it. I continued smiling and hoped that if I wasn’t physically graceful, I could at least be so emotionally. I arrived at my seat, no worse for the wear, and watched as the rest of the wedding party made their entrances.

If I haven’t said this before, it needs to be said. I have great friends. I do. The greatest in the world. And on the special day of my son’s wedding, two sweet friends sent me very similar texts. They simply said, when the doors open and the bride enters, don’t look at her. Watch your son and see his reaction. I knew this would be difficult, because I couldn’t wait to see Kaitlyn, but I also understood that these two friends knew from their own experiences that this would be a priceless, heart-melting, unforgettable moment. And they were so right. With my eyes fixed on Charles, the music started, the doors opened, and I knew that Kaitlyn was walking toward her forever love. I knew because the smile that came across his face said it all. And the tears. The tears that streamed down his face. The tears that he began wiping with a white handkerchief that he pulled from his pocket. The handkerchief that had once belonged to his grandfather, whom he never met. And in that moment, as his tears were soaked into the soft cotton cloth, I felt my dad sitting here with us. I understood the importance of family, and heritage, and history, and love. The importance of advice, and raisins and folding money, and a simple, out of fashion little piece of cotton cloth that unknowingly united strangers in a heavenly way. I understood the necessity of “being still and knowing.” As I sat under the beautifully majestic pecan trees, with the sun setting in the background, surrounded by family and friends and music and laughter, it became so apparent and clear that God’s love transcends time and circumstances, joys and sorrows, life and death, and if we learn to listen, it’s in the stillness that we will find answers and peace–a peace that is a connection to those who are no longer with us.

There are many other stories I would like to share about the wedding day, but I will wait until another time. Right now, it’s still and quiet, and I need to embrace the solitude, as the air conditioner hums softly in the background, and Lorelai scurries across the floor chasing a ball. I’ve entered into a new phase of life, one with which I’m not so familiar, and I need a moment to take it all in. To ready myself for new roles, as I relinquish older ones, clearing new trails, and saying good-bye to more familiar ones. As I continue to “stumble” through this life, it is my hope that I am never short on humility, I am always gracious, and in the highs and lows, ups and downs, disappointments and victories, I hope that my heart is like that handkerchief, and soaks it all up. And there, within my soul, the things that are important will remain.