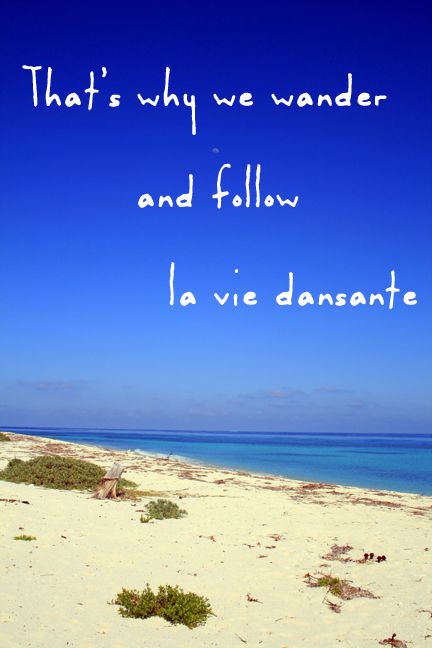 Throughout our lives, we dream of special moments: Graduation, College, First Job, Wedding, Becoming a Parent–and then experiencing all those things again with your children.

Rarely does life ever goes as we imagine. “Life is what happens while you’re busy making other plans.” Through victories and defeats, good times and bad, our lives are defined and measured. And it is in those moments, we make a choice as to how we view and reflect on our experiences–an overall assessment of how well we’ve lived our lives. After a great deal of introspection, and many hours of thinking and overthinking, I’ve decided the phrase “la vie dansante” most closely sums up my time here on earth.

As a freshman in high school, I took French to fulfill my foreign language requirement. I thought it sounded so beautiful (when spoken without an East Texas twang), and I never thought about its practicality. My teacher, Jaye Jean Stewart, commented one day that I looked “European.” I had no idea what she meant, but I decided I liked her observation.

When I entered Texas A&M, I was a Journalism major, and again, was required to take a foreign language. I selected French, even though I had forgotten most of what I had been taught as a starry-eyed fifteen-year-old. My professor was an older man, probably in his seventies. He was very kind, and didn’t make me feel inferior, as I struggled to grasp the fast-paced learning environment.

The professor required classroom participation, as he asked us questions in French, and conducted most of the class without uttering a word in English. One day, he stated that he was going to give a sentence where he would say something to us, and we would have to respond in the first person. Example: “You go to school.” In French, we would have to respond with “Je vais à l’école,” I go to school.

The short, and a little portly professor whirled around the room, giving a sentence for us each to respond to, and my moment finally arrived. The sentence he gave me was, “You sleep in your bed.” Easy enough, right? I thought for a second, and then quickly responded, “Tu dors dans mon lit.”

Relieved that my turn was over, I exhaled and relaxed a little in my desk. Imagine my horror, when the seventy-something-year-old professor exclaimed, “Mademoiselle!”

When the other students began snickering, I realized what I had said: You sleep in my bed.

I ended up changing my major, and fortunately didn’t have to take the second semester of French. To this day, however, I do enjoy using the little knowledge I retained when answering questions on “Jeopardy,” or coming across a phrase in a book or song.

One of my favorite French phrases is “La vie dansante”–translated as “the dancing life.” Jimmy Buffett ends his song, “The Last Mango in Paris,” with “That’s why we wander and follow la vie dansante.”

Over the last couple of weeks, I’ve been reflecting on my life. I turned fifty-seven last week. Gasp! I know! It sounds so old! But to me, it is a milestone–an age I both wanted and dreaded to reach. You see, my father died three days before his fifty-seventh birthday, so for me it was both the time-marker of an ending, and the ultimate destination.

When I lost my dad, I knew that in the grand scheme of things, to die at fifty-seven was considered young. As his daughter, I wouldn’t be able to truly understand how much he missed until I reached that very age. I would never be able to fully “get” the magnitude of his life, and all that he crammed into it, until I, myself, turned fifty-seven.

I have so much more to do! So much life to live! And this birthday reminded me that time is fleeting, and life is precious. This birthday also found me with a new title–that of grandmother, or as my precious grandchildren will know me, “Sassy.”

I’ve always imagined the moment when I could stand in front of the nursery window at the hospital and brag about my grandchild–much like I remember my own mother doing. I often thought of the moment when I could hold the baby in my arms, and beam with pride, knowing as a grandparent I get all the perks! I imagined photo opportunities and grand announcements. The one thing I NEVER factored into these dreams was a PANDEMIC!

Life is what happens when we’re busy making other plans…

Obviously, we weren’t allowed in the hospital. That didn’t keep us from driving to San Antonio, and being in the same city. The baby was coming three weeks early. We went down, not so much to lurk around the hospital parking lot, but to help my son out. There were some things that he was unable to get done that needed our attention. Our job was to help him prepare things for the baby’s arrival home, and to tend to his dog, Marlie.

The many chores kept us busy, but we still looked at the clock all day, wondering when our grandson would arrive. Late in the afternoon, we received word that it was almost time, and within thirty minutes, we received the first photo of Cooper James Keith. It was a sweet, and beautiful moment–but also a little bittersweet, as we realized it might be weeks before we would finally meet our grandson who was born a day before I turned fifty-seven.

To celebrate his birth, and my upcoming birthday, we called an order in to Domino’s Pizza–they have a gluten-free crust! It had been rainy all day, but the sun was trying to peek through the clouds. I waited in the car, and my husband retrieved our supper. As we were driving to the hotel, with the intoxicating smell of Canadian bacon, cheese and tomato sauce dancing around the car, I spotted a rainbow–a huge, glorious, colorful reminder of God’s promise to never leave us. I’ve always loved rainbows, and they play a pretty important role in my book, A Southern Girl Re-Belles, but in that very moment, I didn’t understand the significance of this particular rainbow.

We arrived back to the hotel just in time for a Zoom session with our new little family member. I ate pizza, and smiled bigger than I had in a very long time. Feeling exhausted, I went to bed early, but was awakened to a phone call from my son stating that Cooper was in NICU–he was three weeks early and his lungs needed to strengthen.  It was scary, and heartbreaking, as I heard the fear in my son’s voice. The fear that would remain forever–the fear that comes with being a parent, when one can never, ever truly relax or be worry-free.

Cooper is making great progress, and hopefully will be released from the hospital this week. We have FaceTimed with Kaitlyn and the baby, and talked to Charles often–he hasn’t been able to hold his son since the day he was born.

This isn’t how we planned it. It wasn’t supposed to be this way. BUT, it is. And all we can do is find the good in an otherwise disappointing and frustrating situation.

You see, when it comes to life, you can either be a dancer, or a wallflower. You can choose to be a part of all the beauty, and heartache, and stress, and happiness–or you can watch from the sidelines. I hear it’s much safer there.

I’ve always been a player, rather than a spectator. Even when life knocks me down, I usually find a way to get up and respond in a spirited manner, many times better than before. I don’t give up, although I still feel bruised and beaten at times. I always cling to the knowledge that my heart and mind will heal, and I will be stronger.

So it’s in that spirit, that I will continue to look for the good. I won’t let others bring me down. I will refuse to be put on the bench, to be made to watch, rather than experience.

I now clearly see that the rainbow on April 9, 2020 was God telling me he wouldn’t leave us BEFORE I even knew there was a storm. For that rainbow and realization, I will dance and celebrate, and always have a good laugh about the day my first grandson was born and the doctor on call was Dr. Corona! You can’t make this stuff up!

As I close, I want to challenge you to look for the good and always remember, “Weak people revenge, Strong people forgive, and Intelligent people ignore.” There’s a lot of stuff out there that can bring you down. Focus on all the beauty, and find your strength in knowing that there will be another rainbow. We are not alone or forgotten. This storm will end, and we will rise up and meet the challenge of moving forward and becoming better, and stronger, and kinder, and more understanding than before.

Life is a dance you learn as you go! Put on your dancing shoes and dance the night away! Celebrate the rain and the rainbows! Laissez le bon temps rouler!

As for my Sassy-self, I will celebrate little boys, and rainbows and la vie dansante.