Pajama Day, a Magic Marker, and a Wardrobe Malfunction… 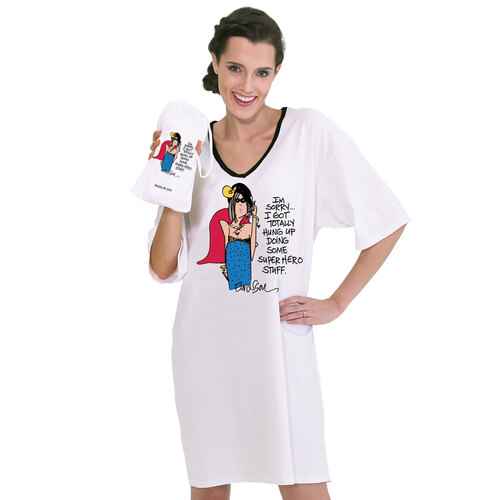 On an ordinary Tuesday, I stopped at the gas station on my way to work. I didn’t need to fill the car up, I just needed an extra dose of caffeine. I don’t do this daily, but that morning seemed like it might be a “Coke Zero, with a splash of real Coke” kind of day.

As I strolled into the establishment and filled up my drink, I saw a couple of people staring at me. I actually knew one of them—-a former student.

I realized after seeing their faces that it was my clothing that had attracted the extra attention—-I was in my pajamas!

Before you think I’ve completely lost my mind, I was dressed up in my pajamas because I don’t want to “ruin my dreams” with drugs. Yep. It’s that time of year…Red Ribbon Week. The week where each day has a different theme, and we are hoping to “scare” drugs away! And of course, learning to “Just say no!”

One would think that waltzing into a gas station in one’s pajamas would be the most embarrassing part of the day! But then again, it’s me, which means it was just another ordinary Tuesday, filled with a splash of humiliation.

Once I arrived at school and took a big sip of my drink, I wandered over to the cafeteria to begin my morning breakfast duty. “Pajama Day” is always a hit with elementary kids since most of them participate in the dress up day. After all, it’s something they all have. Each student who walked my way said, “Look at my PJs!” They were so proud of what they had on, and one even said, “All I had to do to get ready was roll out of bed!” His tousled hair was all the evidence needed to know he was telling the truth.

As I chatted with different students, one young lady asked me what was on my pajamas (the sleep shirt that is shown in the picture above).

I proudly said, “It’s a mom dressed up as Wonder Woman.”

I was at a loss for words. What in the world was she talking about? There was nothing inappropriate about the caricature on my sleep shirt.

I glanced down, just to be sure, since the seeds of doubt had been planted…

And to my horror, I realized that the lady on my pajamas was topless! What the heck? How did I miss this?

I quickly zipped up my jacket to hide the “inappropriateness” that was displayed on my shirt, and tried to focus on opening milk cartons, and distributing extra napkins.

After leading the first graders to their classrooms, I sprinted up the stairs, ran into my office, and examined my pajamas once again. I had never noticed that the skin colored top portion of the woman’s outfit was just that—-skin. I guess when I looked at it, it never, ever crossed my mind that the woman would be flashing herself on my PJs.

I knew that I couldn’t continue through the day with this suggestive, and definitely dress-code-violating attire, so I grabbed a black Sharpie and tried to make a design for the shirt, or rather “add” a shirt for the brazen woman on my pajamas.

I didn’t think this through, and ended up adding all kinds of things, including polka dots, which were added to camouflauge the one “dot” that wasn’t covered by the cape which led the young lady to deem my outfit unsuitable (use your imagination, so I don’t have to spell it out for you). The intent of the polka dots was to hopefully hide the anatomical parts that led the little girl to think that my shirt wasn’t appropriate.

As I perused my handiwork, it was obvious that the additions still looked like I had just drawn on the lady’s skin (and let me add, doing all this while wearing the shirt was a challenge) so I added “color” with a red marker that looked pink, which when I sat down, smeared all over the lower part of my shirt.

I’ve included a photo below, because pictures are worth a thousand words, (or more, in this case)… 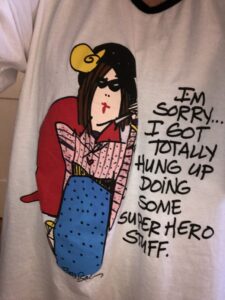 My principal, who was arriving later that morning, sent me a text stating that she was on her way to work (after dropping her daughter and grandchildren off at the airport), and would be showing up in her pajamas shortly. I texted back, “I’ve got a little story about my pajamas…”

I definitely had some ‘splainin’ to do. As I shared the story with her and other teachers, it was just too much. We were all gasping for air, as we howled with laughter. I mean what kind of counselor shows up wearing pajamas with a topless wanna-be wonder woman?

Upon further review of this scandalous faux pas, it seems that this “wonder woman” might have had a night out on the town…possibly on Bourbon Street. While I did survive the day, it tested my resolve, but I am abundantly proud of the fact that I made it through Red Ribbon Week without being driven to drink, or take drugs.

The incident of Pajama Day has earned me a new nickname—-IWW, for Inappropriate Wonder Woman.

Goodness, y’all. All I can say is you just can’t make this stuff up—and I am actually proud that a first grader articulated the word “inappropriate” appropriately.

If you have never seen the video below, you have to watch it. This is Melissa Radke, who is from Lufkin. She became famous after her video about the Red Ribbon Dress-Up Days went viral. She’s a hoot, and can always make me laugh!

At the end of the day, no matter how embarrassing or ridiculous I might have felt, I learned an important lesson—it’s about showing up. Participating. Being a team player. While I’ll always look back on this Red Ribbon Week and laugh at my inappropriateness, it will be a great reminder that I survived the day, was able to laugh at myself, and did it all while remaining drug-free.

Now, if you’ll excuse me, I have more “super-hero” stuff to do…