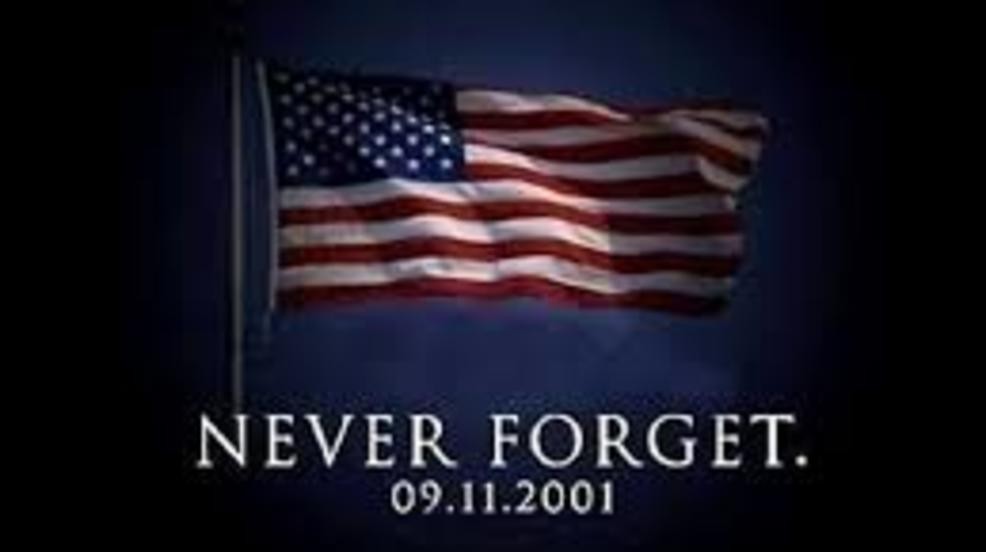 Welp. Labor Day has come and gone and for me that means no more wearing of white.

I guess I’m an extremist on this issue. I understand that there is “winter-white,” and “off-white,” which are perfectly fine to wear in the months between September and Easter. After much thought on this controversial topic, I have come to understand it’s not so much about the color as it is about the fabric. I’ve seen many beautiful winter white outfits, but none were made of cotton, and all were worn with appropriately colored shoes.

I honestly don’t judge people who wear white pants after the first Monday in September. For me, it’s all about the shoes. I hold steadfast to my belief that one should NEVER wear white shoes after Labor Day or before Easter. I realize it’s a pretty ridiculous issue to take a stand on, but in a world where anything goes, it’s where I draw the line.

Let’s face it. I like traditions. Things you can count on. Turkey and dressing, sweet potato casserole, fresh cranberry relish at Thanksgiving. Tamales on Christmas Eve. Stopping at Buc-ee’s whenever we’re on Highway 21 heading south. Waiting until after Thanksgiving to put up the Christmas tree. Taking it down on the 26th (all of this makes me sound so un-fun!)

Traditions connect you to the past, and help you look toward the future, as new generations embrace the ideas and special celebrations.

One of the reasons I attended Texas A&M University was for the heritage and traditions. In fact, it was a family tradition to go to college in Aggieland.

I love the spirit, and the camaraderie, the core values, and the loyalty to the university. Although things have changed since I was there, A&M is still a place where patriotism can be found.

After a year off from attending Aggie games, we returned to A&M last weekend. And as usual, Aggieland did not disappoint. 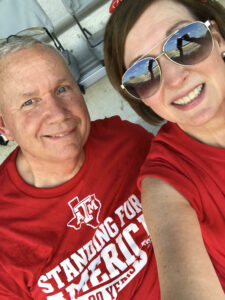 To commemorate the 20th anniversary of the terror attacks of 9/11, Aggies in attendance at Saturday’s game wore red, white, and blue. In 2001, after the twin towers fell, A&M put into motion one of the most iconic moments in its history by designating the game that followed that heart-wrenching day as “Red White & Blue Out.” Each level of the stadium was assigned a color. T-shirts were sold, and money was raised and donated to help victims and first responders. It was amazing. Patriotic. And what Aggies do. 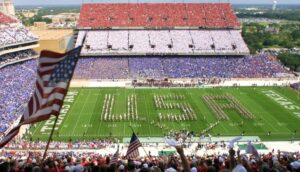 I was a little uneasy as to how this re-creation would go. Would everyone buy into it? Or would it be done halfway, with many objecting to the idea? Would it be something that the media would portray as a “negative”? Would it be “cancel-worthy”?

O me, of little faith…

What I witnessed Saturday was a whole lot of people who love their country, and their university. Words are completely inadequate. I’m honestly at a loss, and am simply trying to piece together enough sentences so you might be able to visualize what happened at Kyle Field. 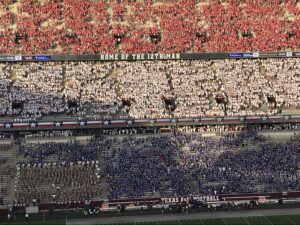 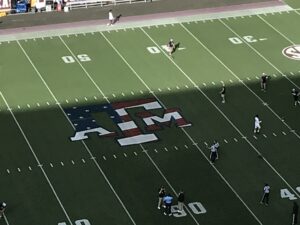 In a year of negativity, and hatred, and bashing of our country… on an ordinary Saturday… just days after we lost soldiers overseas… people from different races, colors, creeds, and backgrounds came together and united to honor those who were lost 20 years ago, as well as our most recent casualties.

It wasn’t in your face. It wasn’t political. It was just a bunch of Americans being unafraid to show their true colors. Unafraid to sing our National Anthem. Unafraid to pray to God in a public place.

It was the America I grew up in. The land that I love so much.

A picture (or video) paints a thousand words, so I’ll let you experience it as you wish. Words simply can’t do it justice.

We lost so much on that September day, but the love, and kindness, and sacrifice, and belief in our people and our nation was stronger in the days, weeks, and months that followed.

When I think back, I try not to think about the horror of September 11, 2001. Instead, I think of the goodness, and realness, and support, and faith that was demonstrated on September 12th. 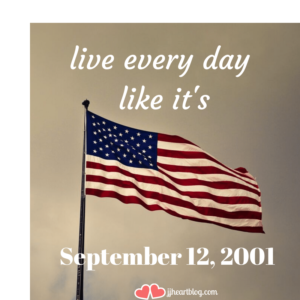 It was great to see such a big comeback for college football—-people outside, yelling for their team, embracing freedom, and remembering the cost of being free.

I’m thankful for being able to unite with fellow Aggies and “Stand for America.” It was special. But I hope it’s something that I do each and every day—stand up for my country.

God Bless all those who lost their lives so that we can live freely. God Bless each of you.

And God Bless the USA! May we never forget…